A Night To Remember

I've been obsessed with the Titanic before they even found the wreckage of the ship.

For anyone who doesn't know, that was in 1985.  I've been obsessed with it since about 1983.  That's when the brilliant-but-cancelled, short-lived, one-season television show starring now-sadly-deceased 80's heartthrob Jon-Erik Hexum, VOYAGERS, did an episode set on the Titanic.  In that episode, the time-traveling Hexum, along with his kid sidekick, had to set history right by getting the Mona Lisa off the doomed ship.  Kid Sidekick tries to save the ship, but Older And Wiser Hexum tells him that he can't change history.  Sometimes tragedies happen.

I'm not sure exactly what it is about the Titanic that has fascinated for nearly thirty years.  I suppose it's a combination of things: that it was the largest moving object in the world, that it was supposed to be "unsinkable," that it was the most luxurious ocean liner ever built, that it was a floating example of a terrible class system, that it was one of the last bastions of chivalry (I doubt it was women & children first on the Costa Concordia), that the band played on as the ship went down.  Because I'm so far removed from that era, it's easy to see the romance of it (as the box office numbers can attest to).  And at the time when I first learned about the Titanic, they hadn't found the wreckage yet.  People had died trying to find it.  It was largest moving object in the world and no one could find it.

Also, in the early years of my obsession, I checked a book out my school library about ghosts and curses, and in it there was a story about how there was a cursed Egyptian mummy being transported from The London Museum to New York on the ship.  An Egyptian curse?!  It really doesn't get any cooler than that.

So, yeah.  I've been obsessed for a long time.

A few years, it occurred to me that the 100th Anniversary of the sinking was coming up, and that there was no way in hell that I was going to let that date pass without doing something.  Something big.  Something like...I don't know...inviting a bunch of my friends over, making them dress up in costume, turning my backyard into a wonderland of candlelight and recreating the final dinner served in the first-class dining saloon.  You know, something simple.  Ha!

So on April 14th, 2012, my most wonderful and intrepid friends indulged this crazy whim of mine and were treated to the most elaborate dinner that will probably ever be served in my house.

Guests arrived at eight, and entered the Grand Saloon, aka the backyard, which had been set up with an elegant table and soft lighting.  Period-appropriate music filled the air (via an iPod; sadly, the budget did not allow for the live string quartet I originally wanted).  Champagne flowed all night.  Six courses were served.  Oysters, cream of barley soup, poached salmon, duck, filet mignon, lamb, eclairs, peaches in chartreuse jelly and French ice cream.  A different wine for each course.  And champagne.  Did I mention the champagne?

It was one of those nights were time stops and nothing matters but good friends and good food, the stars above and the laughter around the table.  At 11:40 pm, the exact time the Titanic hit the iceberg, we played "Nearer My God to Thee" (the hymn the band supposedly played while the ship was sinking) and had a moment of silence.  I'll be honest, though, we were all extremely, uh, merry by that time and the moment of silence was rather giggly.

I've never lost sight of the fact that over 1500 people lost their lives that terrible night 100 years ago.  Part of my fascination with the ship comes from the incredulous question How could they let this happen?  How could they put lifeboats for only half the people on board?  How could the Californian, less than ten miles away, ignore the distress calls?  How could they lower lifeboats, built to carry eighty people, with only twelve people aboard?

But oh, it's hard to think about that when you're sucking a delicious oyster out of its shell.
Posted by Nicole Maggi at 1:31 PM 2 comments

Mia Price is a lightning addict. She’s survived countless strikes, but her craving to connect to the energy in storms endangers her life and the lives of those around her.
Los Angeles, where lightning rarely strikes, is one of the few places Mia feels safe from her addiction. But when an earthquake devastates the city, her haven is transformed into a minefield of chaos and danger. The beaches become massive tent cities. Downtown is a crumbling wasteland, where a traveling party moves to a different empty building each night, the revelers drawn to the destruction by a force they cannot deny. Two warring cults rise to power, and both see Mia as the key to their opposing doomsday prophecies. They believe she has a connection to the freak electrical storm that caused the quake, and to the far more devastating storm that is yet to come.
Mia wants to trust the enigmatic and alluring Jeremy when he promises to protect her, but she fears he isn’t who he claims to be. In the end, the passion and power that brought them together could be their downfall. When the final disaster strikes, Mia must risk unleashing the full horror of her strength to save the people she loves, or lose everything.

Mackenzie and Amy were best friends. Until Amy was brutally murdered.

Since then, Mac's life has been turned upside down. She is being haunted by Amy in her dreams, and an extremist group called the Trackers has come to Mac's hometown of Hemlock to hunt down Amy's killer:

Lupine syndrome--also known as the werewolf virus--is on the rise across the country. Many of the infected try to hide their symptoms, but bloodlust is not easy to control.

Wanting desperately to put an end to her nightmares, Mac decides to investigate Amy's murder herself. She discovers secrets lurking in the shadows of Hemlock, secrets about Amy's boy-friend, Jason, her good pal Kyle, and especially her late best friend. Mac is thrown into a maelstrom of violence and betrayal that puts her life at risk.
CHAINED by Lynne Kelly
After ten-year-old Hastin’s family borrows money to pay for his sister’s hospital bill, he leaves his village in northern India to take a job as an elephant keeper and work off the debt. He thinks it will be an adventure, but he isn’t prepared for the cruel circus owner. The crowds that come to the circus see a lively animal who plays soccer and balances on milk bottles, but Hastin sees Nandita, a sweet elephant and his best friend, who is chained when she’s not performing and hurt with a hook until she learns tricks perfectly. Hastin protects Nandita as best as he can, knowing that the only way they will both survive is if he can find a way for them to escape.


Congratulations to these three authors on their debuts!  All three books are in stores TODAY!
Show More
Show Less

There is an old Cherokee tale.  A father tucks his son into bed, and the son asks for a story.  The father tells him, "Inside everyone there are two wolves.  One is ugly and bitter, full of anger, jealousy, spite, and hate.  The other is beautiful and good, full of humanity, equanimity, loving, generosity, and contentedness."

The son asks, "Which wolf wins?"

The father answers, "The one you feed."

Our world feeds the ugly wolf.  TV and magazines tell us we should be younger, thinner, prettier, richer.  We should drive this kind of car, eat that kind of food, use this kind of shampoo so that our hair can be shinier.  All of it sending the message that we're less than we are.

I'm reminded of these two wolves every day when I leave yoga class (which, incidentally, is where I first heard the story of the two wolves).  My yoga studio is next to a Popeye's Louisiana Chicken.  I have never, ever eaten at a Popeye's, but when I leave class, I'm usually starving, and that Popeye's smells so freaking good and all I want to do is order a bucket of Cajun fried shrimp.

Being on submission for the past few months, feeding the good wolf has been a struggle.  And I can't say there haven't been days when the bad wolf has taken over my house, sitting in the middle of my living room floor and feasting on all the negativity I've fed it. 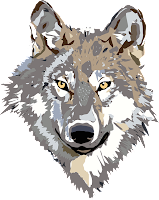 But with constant vigilance, the good wolf has come roaring back, nudging the ugly wolf into a corner, and feeding on a steady diet of good thoughts and positive attitude.  It takes work, though.  It takes effort.  The world around us - full of inauthentic people, flashing negative messages, and criticism about our choices from every direction - wants to feed the bad wolf.  So it is up to us, ourselves alone, to keep the good wolf fat and healthy.

Inside you there are two wolves.  Which wolf will you feed today?
Posted by Nicole Maggi at 12:18 PM 4 comments